If you have repairs with us, they are safe. Please email Ken@WannaBuyAWatch.com to inquire about the status or return to you of any completed repairs.
Home » Our Blog, News, Press, Ken's Musings » Talking Watches With Alton Brown

Check our Instagram page for pictures of Alton Brown at Wanna Buy A Watch?

You asked for it, we delivered. Let’s talk some watches with the man himself.

One thing watch guys are not, is reserved about their opinions. And one thing that seemingly every watch guy has a suggestion about is who we should interview for the next episode of Talking Watches. Today, we’ll be satisfying a whole bunch of you who have been after us to sit down with this gentleman: author, chef, television host, pilot, and all around awesome guy Mr. Alton Brown. Alton is both a culinary and a showbiz powerhouse; his science-of-food series Good Eats is a classic and he’s also hosted Iron Chef America (which is back in production after a three-year absence) as well as this year’s Iron Chef Gauntlet. He’s also toured with his live show, Eat Your Science. Over the course of my career in Talking Watches (which is coming up on four years now!), Alton Brown’s name has been among the most often mentioned as a candidate. And so I’m very proud to present to you the official HODINKEE Talking Watches with Peabody and James Beard Award winner Alton Brown. 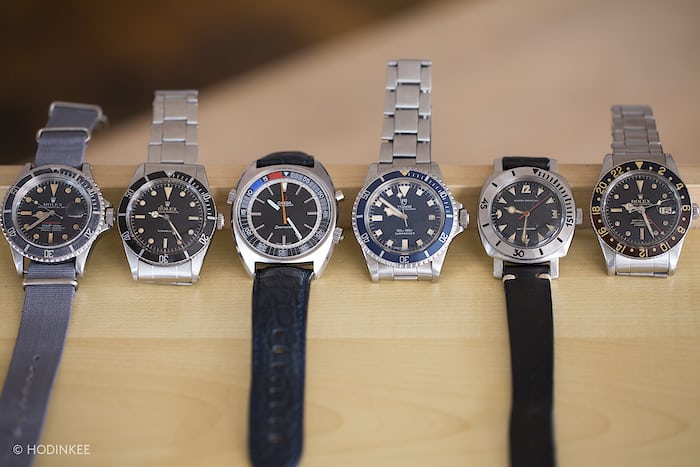 Alton Brown chose six of his favorite watches to bring with him to HODINKEE HQ, five of them being divers. 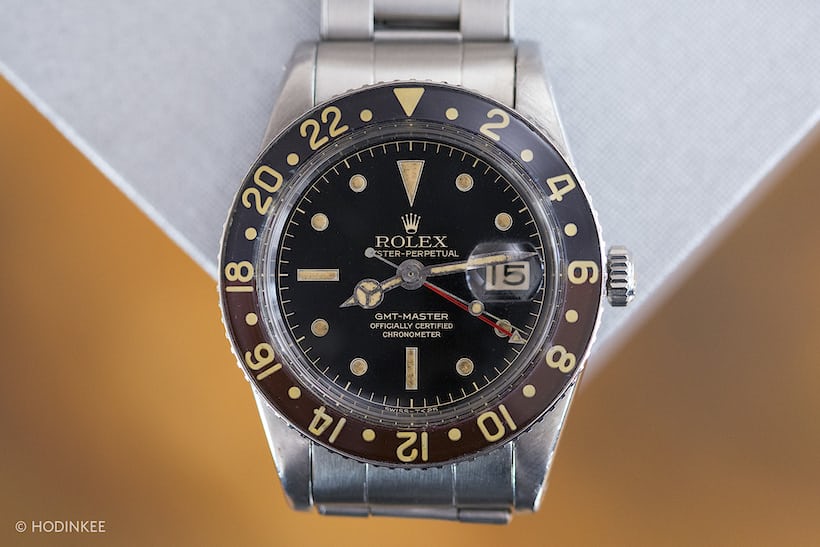 Alton’s choice while flying? A GMT-Master, of course.
Alton Brown is not only a television host, producer, and author, but also a licensed pilot. The GMT-Master is an obvious choice for him, and it’s a watch he makes a point of wearing while flying. This early reference 6542 was serviced early on by Rolex, and as such has become a far more wearable version of this usually more fragile and radium-filled reference. 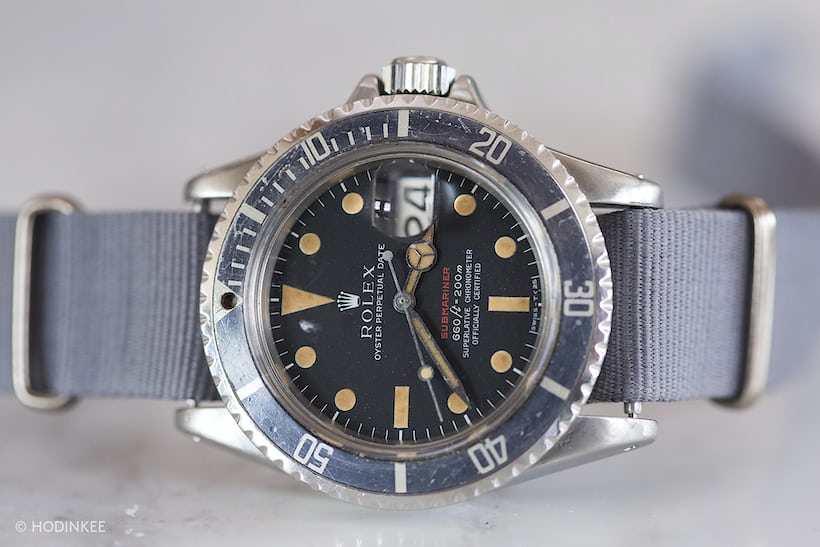 This reference 1680 Red Sub has a wonderful worn look to its bezel and darkened dial.
This 1680 “Red Sub” is one of Alton’s favorites because of the incredible ghosting to the bezel and the deep fading to the markers on the dial. It’s about as large as he’ll go in terms of watch size, but he loves it, and to me, it’s a perfect example of one of the things that makes Submariners so much fun to collect – they really show what type of life they’ve led. 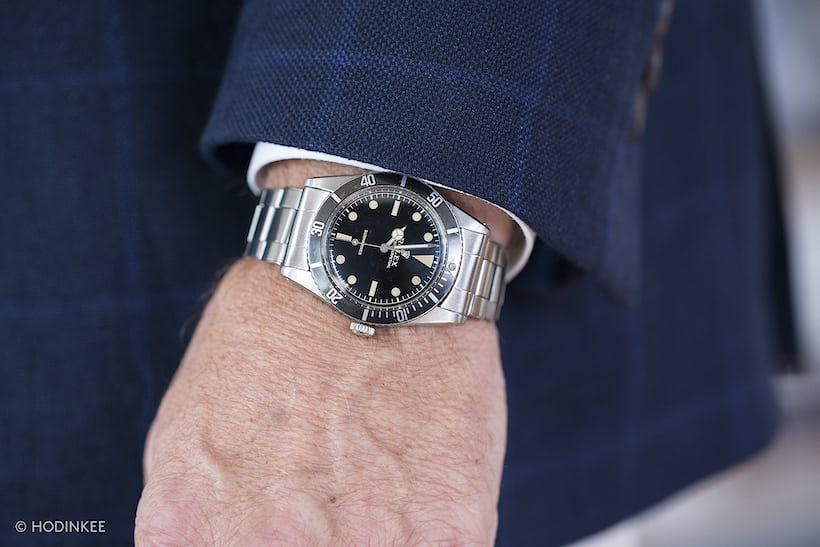 The reference 6205 was among the first Submariners, and used a smaller case than we see today.
Growing up in the 1960s, Alton was fascinated with two things: exploration of space and deep diving. The Submariner – a mainstay, he says, of the culinary world – is arguably the most archetypal of all dive watches, so it’s a must-have. This example is a reference 6205 and he likes it for its small crown, slim case, and gilt dial. He often wears this watch with a suit. 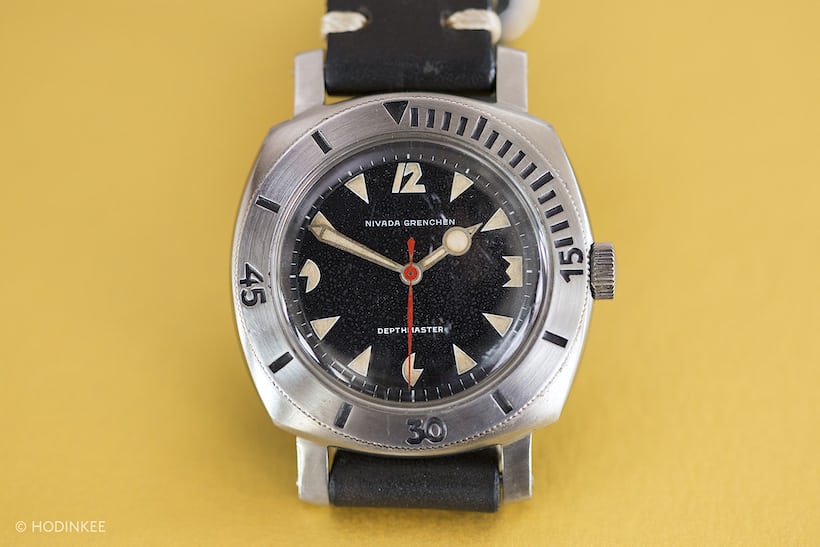 This watch was made in the year of Alton’s birth, and was given to him by a family member.
This Nivada Grenchen is a sentimental favorite for Alton because it was made the very year he was born – 1962 – and it was given to him by a relative many years ago. The case is something of a “baby Panerai” shape and this particular dial is interesting because of its deco, almost “Pac-Man” looking numerals. 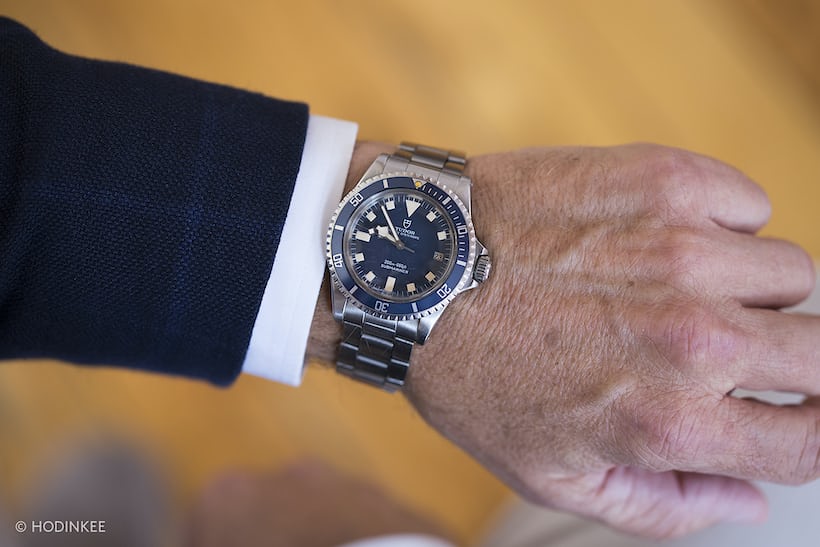 The Tudor Snowflake Sub is a constant companion while traveling.
Alton has a self-described weakness for Tudor, which he sees as the more creative little brother to the elder and more conservative Rolex. This reference 7021 he loves for its blue dial and snowflake hands, and though it originally came with a cyclops on the crystal, he prefers it without. This Tudor Sub is one Alton often wears while traveling. 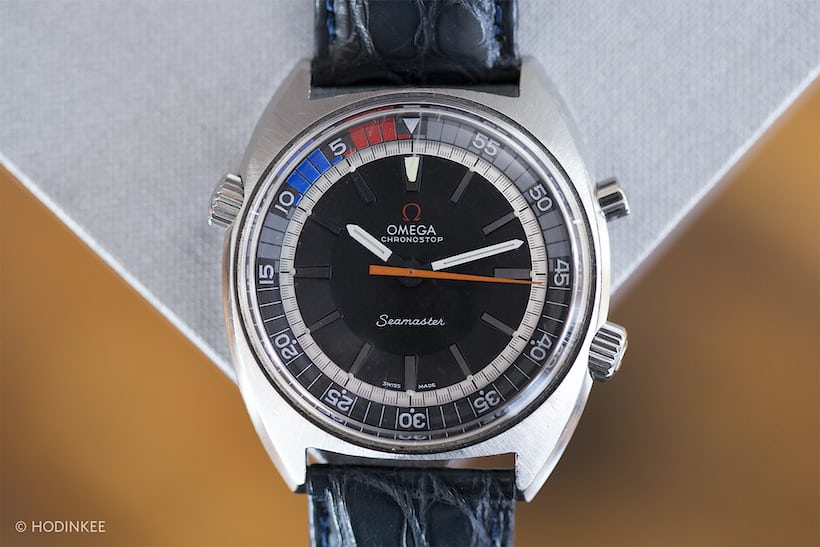 This Omega Chronostop belonged to Alton’s father and after decades of being apart, he was able to find it on Ebay and bring it back to life.
This has to go down as the most incredible story we’ve heard in all four years of Talking Watches. This Omega Chronostop belonged to Alton’s father, and was on his wrist on the day that he passed away in 1973, when Alton was just 10 years old. Alton’s mother eventually gave Alton his dad’s watch, and one day while in college, Alton’s apartment was broken into and the watch was taken. As you can imagine, he was devastated by the loss of his father’s watch and he never stopped looking for it. Some two decades later, Alton located the very watch that was stolen from him – in an Ebay listing. Thanks to his father’s meticulous record keeping, he was able to confirm that this now heavily worn watch was indeed his father’s, and he went about purchasing it. He then found a watchmaker to provide NOS OEM parts to return the watch to the condition in which he remembered it. This Omega Chronostop that once belonged to his father is one of his most prized possessions, and he wears it often, citing the one-minute chronostop function as being very practical for him, because of the one minute legs he’s used to flying while in a holding pattern.

« A Watch Nerd’s Shortlist The Best Vintage Watches to Collect (According to Experts)
Ken gives Giorgia Mondani a tour of Wanna Buy A Watch? »